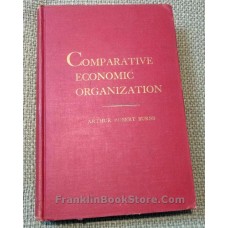 "Studies of "economic system," such as capitalism, socialism, communism and the like, rest upon a recognition of the variety of way of organizing ecomonic life. But such studies have yielded little information as to the outcome of different "systems."".. "The remainder of the book is an attempt to provide a systematic explanation of international differences. Levels of living depend partly on economic potentials and partly on the extent to which human organization achieves full use of them."

by Arthur Robert Burns, 1895-1981. London-born Arthur Robert Burns was trained at the LSE, receiving his Ph.D. in 1928.  A.R. Burns married fellow economist Eveline M. Burns in 1922. Arthur R. and Eveline Burns (involved in creating U.S. social security policy) came to the United States in 1928, and Arthur joined the faculty of Columbia in 1933.  A.R. Burns was a prominent popularizer of the theories of imperfect competititon in the US, re-casting the theories as a strain of the American Institutionalist School.  Milton Friedman would later refer to A.R. Burns as his principal mentor at Columbia. (A.R. Burns is sometimes confused with fellow Columbia colleague Arthur F. Burns) .