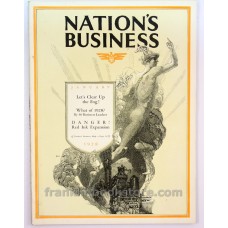 Nation's Business Magazine was the offical magazine of the National Chamber of Commerce. From its first issue, published in September 1912, the magazine proved invaluable in communicating the Chamber’s messages to business and government. Printed originally in newspaper format, and then as a magazine, its circulation increased dramatically in just a few years. Illustrations played an important part in the design. Nation’s Business used images by many of the country’s most prominent photographers until publication ceased in 1999.

Publication of Nation’s Business began during the period of the birth and development of the American magazine. The first two decades of the twentieth century saw the introduction of mass market publications, including McClure’s Magazine, The Saturday Evening Post, and Ladies’ Home Journal. Nation’s Business was a pioneer, focusing specifically on business-related articles and illustrations. The period from 1920 to the late 1950s has been called the golden age of the American magazine. Circulation of Nation’s Business continued to grow, and new stylistic formats with colorful covers and more and more photographs and charts illustrating stories on a wide range of topics were adopted. In the 1950s, the magazine even published short fiction by up-and-coming authors such as Ray Bradbury. The success of Reader’s Digest (1922), Time (1923), and especially Fortune (1930) provided competition. Life magazine’s introduction in 1936 raised magazine illustration to a whole new level, and Nation’s Business responded by seeking more striking images from America’s great photographers. Digital Archives and be found at http://digital.hagley.org