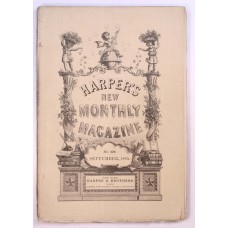 ----An excellent opportunity for the collector, researcher or historian----

Antoine Louis Barye by Theodore Child engraved from George B. Wood's Photographs of Objects in the Walters Collection Baltimore with illustrations: Tiger devouring a Crocodile, Head of the Lion of the Tuileries, Moullin's Bust of Barye, Barye at the Age of Thirty-five, The Tiger Hunt, Lion and Boa-constrictor, Standing Bear, Lion and Serpent, Grand Prize of 1865, The Seine, Tiger and Hare, Tiger rolling on its Back, Two Young Bears fighting, Panther devouring a Gazelle
Across country with a Cavalry Column  -By Rufus Fairchild Zogbaum with Illustrations: The Ford, The Herd, Taps, Breaking Camp, A Halt
An old arithmetician  -By Mary Eleanor Wilkins Freeman
Indian summer (VIII-X)  -By William Dean Howells