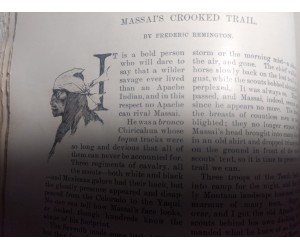 "It is a bold person who will dare to say that a wilder savage ever lived than an Apache Indian, and in this respect no Apache can rival Massai. Massai was a bronco Chiricahua whose tequa tracks were so long and devious that all of them can never be accounted for. Three regiments of cavalry, all the scouts both white and black and Mexicans galore had their hack, but the ghostly presence appeared and disappeared from the Colorado to the Yaqui. No one can tell how Massai's face looks, or looked, though hundreds know the shape of his footprint."

Massai's known history begins when he was a warrior with Geronimo. Geronimo was an Apache, Chiricahua of the Bedonkohe band who fought against the whites and Mexicans from 1858 to 1886 carrying out numerous raids as well as resistance to US and Mexican military campaigns. His guerilla warfare usually included a small band of 25 to 50 Chiricahua Apaches. After several captures and breakouts from the reservations Geronimo's final capture in Mexico in September 1886 by over 5,000 U.S. Army Soldiers and scouts. The Army imprisoned Geronimo and other Apache then transported them to the East. Geronimo was treated as a prisioner of war but given some freedoms. In the following years he was interviewed and seemed to except his fate. But during that prisioner train ride to a Florida reservation, Massai escaped somewhere east of Kansas City. This photo of Geronimo and his last band of warriors may include the elusive Massai. https://en.wikipedia.org/wiki/Massai 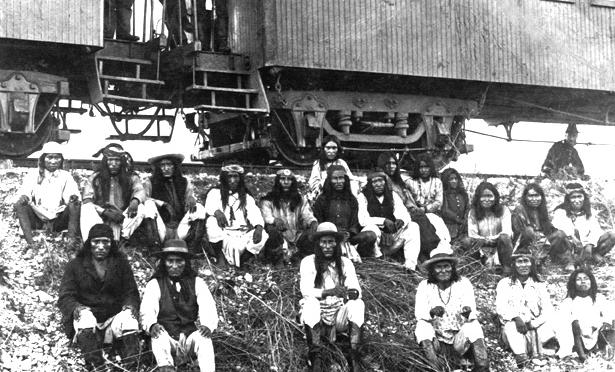 So this fascinating story by Frederic Remington told to him by the Chief of Scouts of The Tenth included tales from a kidnapped girl named Natastale.

"I was chief of scouts at Apache in the fall of '90, when word was brought in that an Indian girl named Natastale had disappeared, and that her mother was found under a walnut-tree with a bullet through her body."

"Massai then became a problem to succcessive chiefs of scouts, a bugbear to the reservation Indians, and a terror to Arizona. If a man was killed or a woman missed, the Indians came galloping and the scouts lay on his trail. If he met a woman in the defiles, he stretched her dead if she did not please his errant fancy. He took pot-shots at the men ploughing in their little fields, and knocked the Mexican bull drivers on the head as they plodded through the blinding dust of the Globe Road....."