This booklet is about a black leader before, during and after the Civil War the Reverend John Jasper. 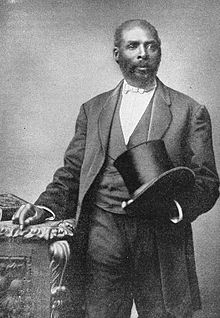 Jasper is now little known but was arguably one of the most famous black ministers during the nineteenth-century, who gained popularity for his electrifying preaching style and his ability to spiritually move both black and white Baptists.  Written in 1936 by Howard H. Harlan, Harlan writes "One method by which we can arrive at an understanding of how the Negro race has achieved the measure of adjustment which it has, and by which we may hope to predict the direction which further accommodation can be expected to take, is in a systematic study of the leadership which this race has recruited in its progress toward adaptation. If we can know the character of its leaders, if we can understand what they have done and what they have striven for, then we may better know the race and better understand what it has struggled for and how it has endeavored to achieve its goal. Its leaders epitomize the ideals, the aspirations, the fears, the antagonisms, the thoughts and feelings of a group." ... after the civil war Harlan explains "Education in the Sunday School took on a new freedom. Here the Negro learned the alphabet, the spelling of simple then longer words, and finally to read the Bible."

John Jasper tells the story of his conversion as a young man in 1839 before the Civil War working in a tobacco factory; on page 18 "I was as light as a feather; my feet was on de mount'n; salvation rol'd like as flood thru my soul, an' I felt as if I could 'nock off de fact'ry roof wid my shouts. But I sez to myself, I gwine to hol' still till dinner, an' so I cried, and laffed, and' tore up de torbacker. Pres'ntly I looked up de table, an' dar was an old man, he lov me, an' tried hard to lead me out de darkness, an' I slip roun' to whar de was, an ' I sez in his ear as low as I could; 'Hallelujah; my soul is redeemed!' Den I jump back quick to my work,.............."

His sermons continued to attract eager audiences, but none seem to draw more listeners than his famous discourse, “De Sun Do Move” given in 1878.

John Jasper pastored Mount Zion for 34 years. He died March 28, 1901, at the age of 89. The Richmond paper announced the death of John Jasper on its front page. His last words were, “I have finished my work, I am waiting at the Riv­er, looking across for further orders.”