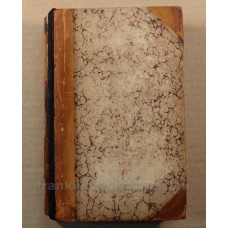 Fair Condition, leather and marbled paper hardbound, leather flaked off most of spine, hinges have been repaired and function, pages have some foxing, 5.5" x 9" tall, 588 pages plus index,Edited by James Johnson, and Henry James Johnson, republished by Richard & George S. Wood no. 261 Pearl-Street New York 1836