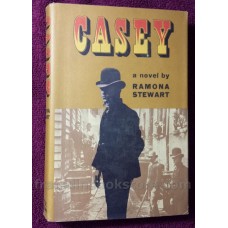 Little Brown and Co. 1968  Very Good++ with jacket hardback 6811528 6” x 8.5” 400 1st Edition. Another riot began that evening. It was not so bad as the riots of three years before when the streets were barricaded for days, City Hall was held by the mob, and the troops were called in. It was just another one of dozens of small local riots that rippled across the city in a year