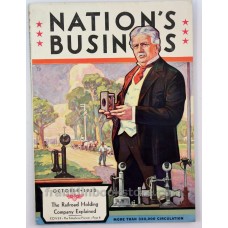 Nation's Business Magazine was the offical magazine of the National Chamber of Commerce. From its first issue, published in September 1912, the magazine proved invaluable in communicating the Chamber’s messages to business and government. Printed originally in newspaper format, and then as a magazine, its circulation increased dramatically in just a few years. Illustrations played an important part in the design. Nation’s Business used images by many of the country’s most prominent photographers until publication ceased in 1999.