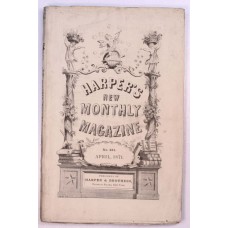 Size and Page Count:6.5" X 10" Tall, 171 pages the back cover with book advertisements and statement of Harper's New Monthly Magazine.

-------An excellent opportunity for the collector, researcher, or historian------