Absalon Suspended by the Hair by James Tissot 1898 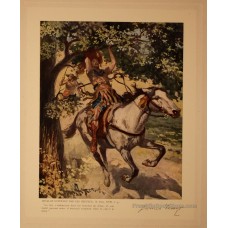 Absalon Suspended by the Hair II Samuel 18: Verse 9.  His head became entangled in the branches of oak, and, ignoring his mule he remained suspended between heaven and earth.

King James. And Absalom met the servants of David. And Absalom rode upon a mule, and the mule went under the thick boughs of a great oak, and his head caught hold of the oak, and he was taken up between the heaven and the earth; and the mule that was under him went away.

Condition: Very Good to Fine, board has very light foxing and brown edge, painting is bright clean, possibly gouache on board. No sure how many of these prints were made. Did not find a number on board but there is a embossed stamp 'JTL'.