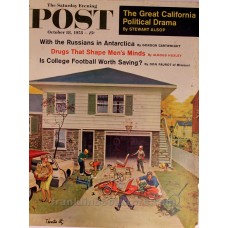 Condition: Good -  some foxing on edge of cover and 2 very small tears at edge

Illustration Description:The boys  and Dad are building a go-cart in the driveway ,  mom parks in the yard and struggles to get the groceries from the car, illustration by Thornton Utz.

"Thorton Utz was born in the southern town of Memphis, Tennesee, a location his German ancestors first settled generations earlier. The men in the family established roots as craftsmen, which led Thorton's father to a profession in the carriage trimming business. When carriages gave way to the automobile, his father made an easy transition into the automobile upholstery trade. Thorton was the youngest of six but the only son. The neighborhood he grew up in was filled with large families of modest means. At twelve, Thorton began creating a comic strip that he distributed to the neighborhood kids. "I must have enjoyed that first taste of drawing because I kept at it. I remember doing a design for a decorative carving we made in manual training."

In high school the only training in the art field was found at Memphis Technical. Utz received encouragement from his teacher, Burton Callicott, a former commercial artist who emphasized the practical use of an art career. During his second year of training, he befriended Euclid Shook, who would quickly become his partner in many artistic enterprises for the next several years. During the summer Utz and Shook would do display work for the Mid-South Fair, as well as floats for the Cotton Carnival. Willing to tackle just about anything, they were rarely without work. Utz and Shook graduated from high school in 1933 and over the course of the next year managed to save enough to enroll in the American Academy of Art in Chicago. As Thorton reminisced, "I don't think I learned much that year - except that I would never learn art in an art school."

Running low on funds, young Utz slowly but surely worked his way into a steady position in advertising by moving from one print shop to the next. During this time while making a call on fellow artist, Ben Stahl, he met a charming and beautiful model named Louise Prohaska. Although they struck up a friendship, it would take some time for her to warm to the idea of a relationship with a starving artist. Finally, love won over and they decided to marry on March 6, 1940. Again his relationship with Ben Stahl would surface when Ben passed on a freelance project to do a color page for Bell Aircobra. Out of this grew a business that would sustain him in the years to come.

Signing an agent in 1944, Utz received his first big magazine assignment by illustrating a short story for The Saturday Evening Post. A growing family was soon supported by his growing success. Thorton Utz found life with his wife Louise, two girls, Merrily and Wendy, and son David, a fulfilling experience. During February of 1946, on a trip to New York, Louise and Thorton stumbled upon Westport, Connecticut while vacationing with Ben Stahl. The next major step for the Utz family was purchasing a home in Westport, Connecticut. The Utz's settled quickly into this comfortable hamlet and became part of an artistic community that supported the public and private life of this young couple.

The 50's brought prosperity to the country as a whole, and Thorton's knack for capturing the humorous in everyday situations fueled his personal success. Suburbia and the nuclear family provided ample subject matter and Thorton's photographic snapshots on canvas were widely sought after. Commuting was a common practice, as wives would often drive their husbands to the train station, and later their children to the bus stop. Utz's February 2, 1957 Saturday Evening Post cover typifies everyday dilemmas showing a wife rushing in her nightgown to the train station to deliver her husband's forgotten briefcase. Utz often employed mutiple frames to show the progression of an event. Life in suburbia produced gender stereotypes that became wonderful topics for vignettes that captured American culture and interesting idiosyncratic behavior. During this period Thorton produced forty-five (45) covers for The Post.

Utz's wife, Louise, became ill in the mid 60's and he took personal charge of her care. This may have been the reason for Thorton's move to the Sarasota area, as Louise’s health continued to decline. During this time away from the commercial world in the late 60's and early 70’s, magazine advertising was being offset by the television industry. After Louise died, Utz formed a map-making business, doing illustrated maps of the Sarasota area until he was able to sell the small business and return to his art on a more regular basis.

Utz eventually remarried. He and his new wife, Maud, added a son, Scott and daughter, Dawn to their previous families and began a shared life together. Along with this new relationship in his personal life, came a fresh phase in Thorton's career. He would build a lovely home, which includes a studio of his own design. He began to develop his portraiture work along with the help of Maud. They would interview the prospective client, get a feel for their living environment, and take a series of photographs that could be used as a reference upon returning to the studio. Utz would then proceed to paint five or six poses. The client was then given several thematic backgrounds to choose from and the rest were offered as artwork in his gallery. Several of his more famous subjects were Jimmy and Amy Carter and the Princess of Monaco. This would become the mainstay of Thorton Utz career until his death in 2000."  Source - Curtis Publishing
-