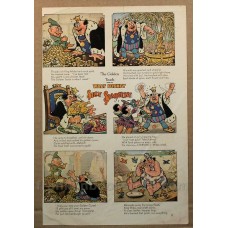 Though rich King Midas had much gold,

He wanted more. "I've been told

My wealth is only chicken feed!

The Golden Touch is what i need!"

The Golden Touch is a Walt Disney Silly Symphony cartoon made in 1935 was earlier published on THIS comic page in Good Housekeeping Magazine. The story is based on the Greek myth of King Midas, albeit with a medieval setting. The Golden Touch was an attempt by Walt Disney to direct a cartoon, which he hadn't done for five years.