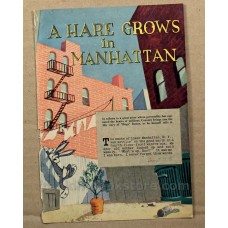 An autobiographical piece that was published in the December issue of Coronet magazine in 1945. Later released as a cartoon on March 22, 1947, A Hare Grows In Manhattan is a Warner Bros. in the Merrie Melodies series. In the autobiography, Bugs recounts his rise to fame and only briefly mentions his days on the streets of Manhattan which he describes as "simple and carefree". He would spend his days throwing rocks at his pals, stealing carrots from local pushcarts, and dealing with thugs using his "rabbit punch" technique.

The story continues in which Bugs reveals that his name was given to him by his family for his funny antics.In time he would land a job at a place called the Palace where he would serve as the rabbit in the hat of the magician the Great Presto. Eventually he would leave for Hollywood, much to the sadness of his parents, to become a star. Which he boasted that he "arrived just in time to save the movies from the hams who was overrunning it" See Wikipedia