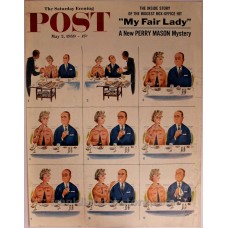 Cover Illustration:  Dieting Through Dessert Description of Cover:
Mr. Noble, on Constantin Alajalov’s 1959 cover, doesn’t even make it through dessert. His pretty dinner companion is overjoyed at the thought of strawberry shortcake, but Mr. Noble (panel 2) nobly declines. Pretty lady jabbers away, enjoying her dessert, while Mr. N looks like…well, remember that dog you had who watched with pitiful, soulful eyes as you forked down your dinner? Like that. Finally taking pity by the eighth panel of this scenario, the lady gives the last bite of dessert to the man, making for a happy couple in the last segment.

Constantin Alajalov (also Aladjalov)
(1900 in Rostov, Russia - October 23, 1987 in Amenia, New York) was an American painter and illustratorHe immigrated to New York City in 1923. He is of Russian Descent. He became a citizen in 1928. His illustrations were on the cover of The New Yorker and The Saturday Evening Post. His works are in the Museum of Modern Art and the Brooklyn Museum.
Constantin Alajalov was born in Rostov, Russia in 1900 and died in New York in 1987. He painted posters for revolutions in Russia and Persia before emigrating to New York. He then illustrated magazine covers for the The Saturday Evening Post and The New Yorker until he died at age 87.
Growing up with an education allowed Alajalov to practice his artistic talent and create his own style using color paints with detail, making a comical scene out of real life situations and painting them in a story telling manner that can make anyone laugh. Despite this, he wasn't a recognized artist, even while in a university at age 16. Alajalov's education also gave him a well-rounded and worldly perspective which helped with his artistic style.
In 1916, the Red Revolution broke out, interrupting Alajalov's time at the University of Petrograd. Unable to stay, Alajalov joined a government organized group of artists. Traveling the countryside, they painted large propaganda murals and posters for the revolution. After this, Alajalov emigrated to Persia and again started painting for a revolution until no longer safe.
After his stay in Persia, Alajalov headed to Constantinople, his last stop before he emigrated to America at age 23. Getting a job was hard, but he finally landed one painting wall murals at a restaurant about to be opened by a Russian Countess. Within three years, Alajalov was selling his paintings to the The New Yorker. Later, he also began painting for the The Saturday Evening Post and that became his lifelong career.
After submitting his last painting of an accomplished bridge player, Alajalov died at age 87. While he didn't get very much recognition while he was alive, Constantin Alajalov is remembered now for his humorous way of painting life's situations.
His papers are at Syracuse University,and the Archives of American Art.
Source- Wikipedia