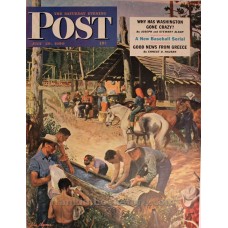 Artist:
John Ford Clymer (January 29, 1907 - November 2, 1989) was an American painter and illustrator known for his work that captured nature and the American West. His father was a florist. After finishing high school John Clymer studied at the Vancouver British Columbia School of Art, Ontario College of Art and later at The Grand Central School of Art. His first assignments were for Canadian periodicals and advertisements.
Clymer's first work for the pulps was drawing black and white interior story illustrations for Adventure and Blue Book. He sold only a few freelance pulp covers to Romance and Triple-X Magazine.
Clymer served in the Marine Corps Reserve during WW2, along with his friend, Tom Lovell. They were assigned to Washington, DC., where they created artwork for the U.S. Marine Corps magazine, Leatherneck, as well as patriotic poster designs.
After the war John Clymer worked for men's adventure magazines such as Sports Afield, True, Outdoor Life and Argosy. He soon developed a significant career career as a slick magazine illustrator, working for such magazines as The American, Colliers, Cosmopolitan, Esquire, Liberty, MacLean's, Redbook, Woman's Day, and The Saturday Evening Post. By 1963 John Clymer had painted over eighty covers for The Saturday Evening Post.
In describing his working process, the artist advised the use of both sketches and photos, "The sketch gives you the feel, but the photo gives you the facts. Next, make a small oil on canvas for the mood. Then comes the finished painting, where you emphasize the beautiful and wonderful and leave everything else out."
In 1966, the Clymers moved to Teton Village, Wyoming, where John Clymer died at age eighty-two on November 2, 1989.