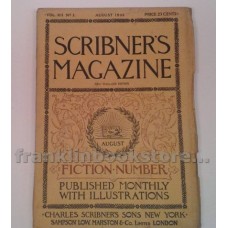 Condition: Good -  some red ink smudges on a few pages and a few illustrations, this magazine has the normal uncut pages that have some edges rolled, the binding very good and pages otherwise very good.

Illustrations Information :45 illustrations, plus those with the advertizements

Articles and Information:  This is the annual fiction number of Scribner's. It contains seven stories, four of them handsomely illustrated. The complete contents are:

"I Have Followed the Currents Under the Branches." Frontispiece. Drawn by C. Delort; engraved by F. A. Pettit.

"Stories of a Western Town”'I. The Besetment of Kurt Lieders.'" By Octave Thanet; illustrated by A. B. Frost.

"A Riverside Parish." By Walter Besant. [The fifth article in the series on " The Poor in Great Cities."] Illustrated by Hugh Thomson.

"Sun in the Willows." By Harrison S. Morns.

"When the Century Came In." By Mrs. Burton Harrison.

"After the Battle." By Edgar Mayhew Bacon.

"The Triumph of Mary Laviolette." By Duncan Campbell Scott; illustrated by Chester Loomis.

"How I Sent My Aunt to Baltimore”A True Story." By Charles Stewart Davison.

"Historic Moments: Driving the Last Spike of the Union Pacific." By Sidney Dillon; with illustrations from a photograph.

"The Point of View."  'A Lack of Faith in Literature ' The Deucalion of Tahit 'The Perfect Person in Fiction' 'A Provision for Age.'

An excellent opportunity for the collector, researcher or historian